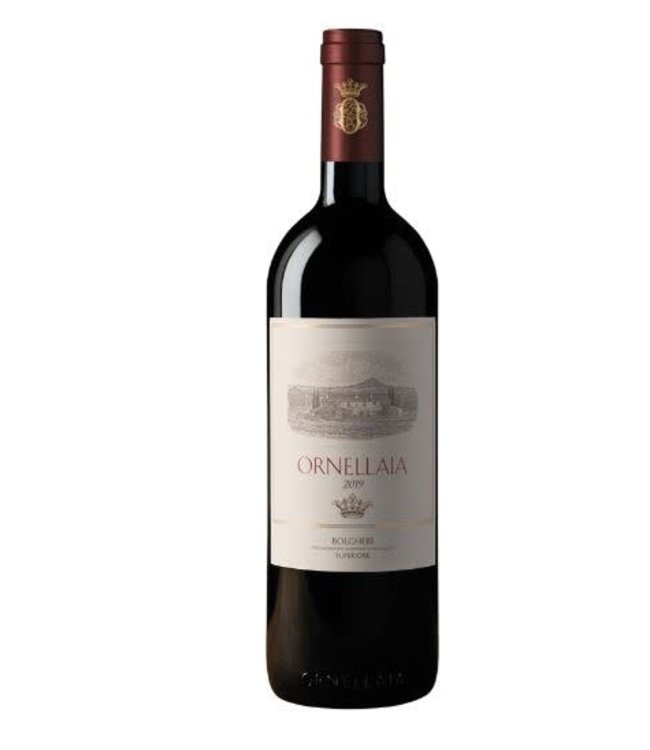 A gorgeous wine in every facet, offering a gorgeous bouquet of redcurrants, black cherries, tobacco and loamy earth. Full-bodied, a remarkable purity as well as depth, spot-on, ripe, building, yet perfectly integrated tannins, and a great, great finish. Read more..

The desire to nurture the Estate’s exceptional qualities has shaped Ornellaia’s philosophy since the beginning. Ornellaia is a cuvée of Cabernet Sauvignon, Merlot, Cabernet Franc & Petit Verdot and the faithful expression of unique terroir developed in harmony with nature.

More than most vintages, 2019 was characterized by a highly variable climate, which alternated periods of cold and rain with long bouts of drought and heat. After a normal winter, the budding took place in the first week of April. The cold and rainy conditions throughout April and May significantly slowed down the vegetative vine growth, leading to a 10-day delay in flowering compared to the average. Very hot, rainless weather suddenly arrived in June, reaching temperature peaks of 37°C at the end of the month. The weather stayed warm and sunny throughout the summer with temperatures 2°C above average and 45 consecutive days without rain. The long dry period was interrupted by two days of rain in the last week of July, bringing the temperature back to the seasonal norm, with ideal conditions for ripening. The harvest began slowly on 5th September. As usual, the last week of September saw a lowering of temperatures which made it possible to preserve a great finesse and aromatic freshness. Sunny conditions returned after another rainy event on 21st September, which allowed us to conclude the harvest of the later ripening varieties on 4th October.

A gorgeous wine in every facet, offering a gorgeous bouquet of redcurrants, black cherries, tobacco ..